by Shehin
in Science, Viral News
0

A series of unfortunate news is coming in from Antarctica; scientists have discovered an active leak of methane in the seabed. Methane is a harmful gas and is one of the primary contributors to climate change.

This might be the first active leak of methane from the seafloor in Antarctica. The researchers also found microbes that normally consume the potent greenhouse gas before it reaches the atmosphere had only arrived in small numbers after five years, allowing the gas to escape.

Vast quantities of methane are thought to be stored under the seafloor around Antarctica. The gas could start to leak as the climate crisis warms the oceans, a prospect the researchers said was “incredibly concerning”.

The reason for the leak or the events leading up to it is still unknown. A large quantity of methane is stored under the seabed in Antarctica, with this leak suspected to be a product of the warming of oceans. Ironically, the location where it was found – Ross Sea is not currently heating at levels enough to expel methane.

The active seep was first spotted by chance by divers in 2011, but it took scientists until 2016 to return to the site and study it in detail, before beginning laboratory work.

The research also has significance for climate models, which currently do not account for a delay in the microbial consumption of escaping methane.

“The delay [in methane consumption] is the most important finding,” said Andrew Thurber, from Oregon State University in the US, who led the research. “It is not good news. It took more than five years for the microbes to begin to show up and even then there was still methane rapidly escaping from the seafloor.”

Usually considered a direct consequence of global warming and a signifier of its pace, the release of this harmful gas from underwater sources will have long-lasting negative impacts on the ocean and marine life.

Thurber referred to the discovery as a “natural laboratory” to undertake additional research. The seep is located next to an active volcano but Thurber doesn’t believe it came from there.

The release of methane from frozen underwater stores or permafrost regions is one of the key tipping points that scientists are concerned about, which occur when a particular impact of global heating becomes unstoppable. Scientists shocked by Arctic permafrost thawing 70 years sooner than predicted.

“The methane cycle is absolutely something that we as a society need to be concerned about,” said Thurber.

The research, published in the journal Proceedings of the Royal Society B, reports the discovery of the methane seep at a 10-meter (30ft) deep site known as Cinder Cones in McMurdo Sound. It is a 70-meter long patch of white microbial mats, and a second seep was found during the 2016 expedition.

The source of the methane is probably decaying algae deposits buried under sediments and is likely to be thousands of years old. In most parts of the oceans, methane leaking from the sea bed is consumed by microbes in the sediment or the water column above. But the slow growth of microbes at the Cinder Cones site, and its shallow depth, means methane is almost certain to be leaking into the atmosphere. 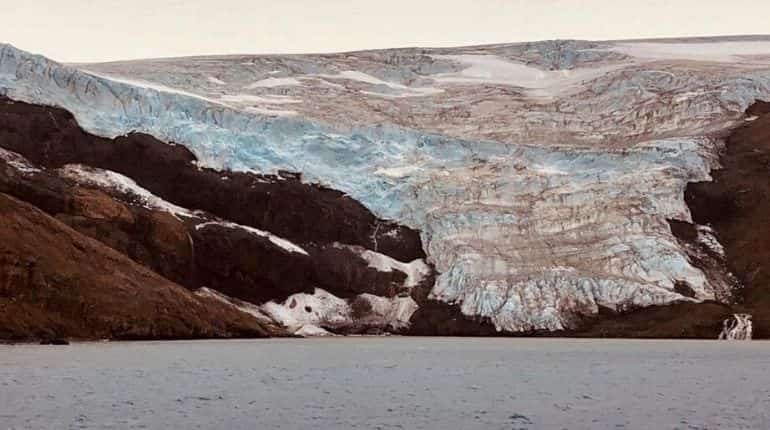 This image released by the Chilean Antarctic Institute shows Antarctica without snow at Base Presidente Eduardo Frei Montalva on Fildes Bay, King George Island, on February 14, 2020.

This is not the first methane leak to be spotted. In 2014, a similar leak was spotted in South Georgia, making it the first leak in the Southern Ocean.

However, the understanding of these holes will vary, as they are located in fundamentally different ocean regions and sustain different conditions for life.

All research on the region remains suspended owing to the COVID-19 pandemic. The fear of carrying it to the remote region is the concern, not contracting the virus, for the continent is coronavirus free.